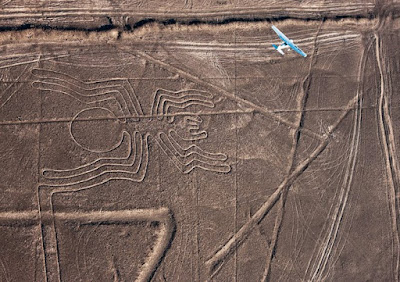 The image of a spider on the Nasca plain.
The April issue of National Geographic online features an extensive article regarding the Nasca civilization in Peru, including the origin, culture and other key aspects of this mysterious people who inhabited the coastal region of southern Peru more than two millennia ago.
Today the Nasca are most famous for their “lines” portraying huge images visible from aircraft. The article explores the question of the Nasca lines with new information such as this:

They were not made at one time, in one place, for one purpose. Many have been superimposed on older ones, with erasures and overwritings complicating their interpretation; archaeologist Helaine Silverman once likened them to the scribbling on a blackboard at the end of a busy day at school. The popular notion that they can be seen only from the air is a modern myth. The early Paracas-era geoglyphs were placed on hillsides where they could be seen from the pampa.

Click here for the complete article.
Posted by Gregory LeFever at 2:57 PM