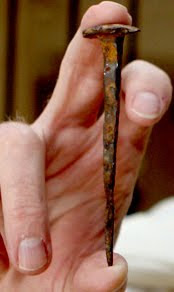 A four-inch nail thought to be one of thousands used in crucifixions across the Roman empire has been found at a remote fort believed to have once been a stronghold of the Knights Templar.

Archaeologists believe it dates from either the first or second century AD. It was found last summer in a decorated box in a fort on the tiny isle of Ilheu de Pontinha ~ just off the coast of Madeira ~ thought to have been held by the Knights Templar, the religious order that was part of the Christian forces which occupied Jerusalem during the Crusades in the 12th century.

Bryn Walters, an archaeologist, said the iron nail's remarkable condition suggested it had been handed with extreme care, as if it was a relic. "It dates from the first to second centuries," he told the Daily Mirror. While one would expect the surface to be "pitted and rough" he said on this nail the surface was smooth. That suggested that many people had handled it over the centuries, with the acid on their hands giving it a "peculiar finish.”

Click here for the London Telegraph article.
Posted by Gregory LeFever at 8:02 PM