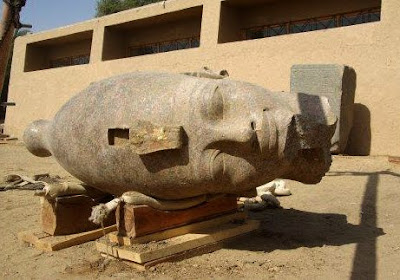 The red granite head of King Amenhotep III ~ who ruled Egypt between 1390 and 1352 BC ~ is part of a larger 3,000 year-old statue discovered at the site of the pharaoh's funerary temple in Luxor.

"The newly discovered head is intact and measures 2.5 metres (8.2 foot) high," antiquities chief Zahi Hawass was quoted as saying. "It is a masterpiece of highly artistic quality and shows a portrait of the king with very fine youthful sculptured features."

The artefact belongs to a large statue of the king standing with his hands crossed over his chest and holding the royal insignia, said Hourig Sourouzian who headed the team of archaeologists that made the find.

Click here for the completel AFP article.
Posted by Gregory LeFever at 7:35 PM