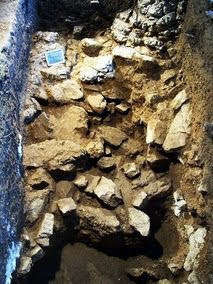 Palaeontologists have unearthed what is believed to be the oldest stone wall in Greece, standing at the entrance of a cave in Thessaly for the last 23,000 years.

The age of the find ~ determined by an optical dating test ~ singles it out as "probably one of the oldest in the world", according to a Ministry of Culture press release. "The dating matches the coldest period of the most recent ice age, indicating that the cavern's paleolithic inhabitants built it to protect themselves from the cold.”

The wall blocked two-thirds of the entrance to the cave, located close to Kalambaka in central Greece. Greek palaeontologists have been excavating the site for the last 25 years.
Posted by Gregory LeFever at 8:22 PM