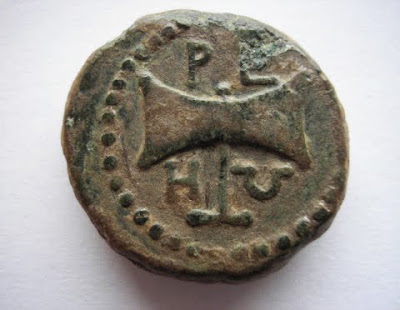 Coin found near tomb displays King Amatokos II coat of arms.
After years of research, the Starosel Tomb in Bulgaria has been dated to the 4th century BC. The Ancient Thrace tomb is the largest underground temple on the Balkan Peninsula.
In the summer of 2009, an archaeological team took samples from a stake in the middle of the tomb where gifts to the Greek goddess of the hearth Hestia had been laid. Radio carbon dating carried out in Germany has shown that the stake was burned in the period after 358 BC, when the temple was constructed, and dirt was heaped on top of it to form a burial mound.
Current analysis indicates that the temple in the village of Starosel and the nearby Thracian ruler’s residence under Mount Kozi Gramadi were built during the reign of the Thracian King Amatokos II (359-351 BC). The family coat of arms of King Amatokos was a doubleheaded ax, or a labrys. Symbols of a labrys were discovered on several items around Starosel, including Thracian coins.
Click here for the complete article.
Posted by Gregory LeFever at 11:39 AM

The coin is from King Teres. THat isn't a coat of arms. If memory serves me right, it is Teres III. The coin shows an axe, with the name Teres around, in some sort of possessive case, I think.