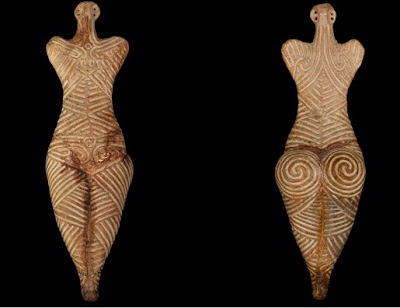 Front and back of fired-clay female figurine, circa 4050 BC.
Archaeologists and historians are assembling the history of a society that existed in the Balkan foothills around 5000 BC ~ long before the rise of Greece and Rome ~ and produced surprisingly advanced art, technology, and long-distance commerce. No one knows what these people called themselves, but historians are now labeling them simply “Old Europe.”

According to the New York Times:

For 1,500 years, starting earlier than 5000 B.C., they farmed and built sizable towns, a few with as many as 2,000 dwellings. They mastered large-scale copper smelting, the new technology of the age. Their graves held an impressive array of exquisite headdresses and necklaces and, in one cemetery, the earliest major assemblage of gold artifacts to be found anywhere in the world.

Until recently, the most recognizable artifacts from Old Europe were terracotta “goddess” figurines, originally regarded as evidence of the spiritual and political power of women in society.

Although excavations over the last century uncovered traces of ancient settlements and the goddess figurines, it was not until local archaeologists in 1972 discovered a large fifth-millennium B.C. cemetery at Varna, Bulgaria, that they began to suspect these were not poor people living in unstructured egalitarian societies. Even then, confined in cold war isolation behind the Iron Curtain, Bulgarians and Romanians were unable to spread their knowledge to the West.
The story now emerging is of pioneer farmers after about 6200 B.C. moving north into Old Europe from Greece and Macedonia, bringing wheat and barley seeds and domesticated cattle and sheep. They established colonies along the Black Sea and in the river plains and hills, and these evolved into related but somewhat distinct cultures, archaeologists have learned. The settlements maintained close contact through networks of trade in copper and gold and also shared patterns of ceramics.

New research, archaeologists and historians say, has broadened understanding of this long overlooked culture, which seemed to have approached the threshold of “civilization” status. 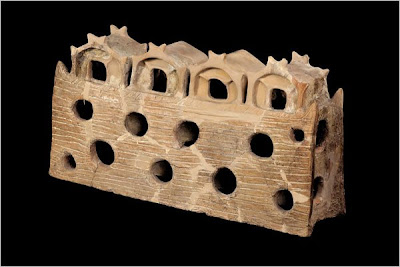 Fired clay architectural model from Old Europe, circa 4050 BC.

Posted by Gregory LeFever at 9:36 AM