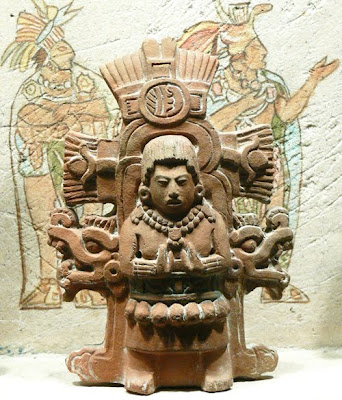 Mayan priest from National Museum of Anthropology in Mexico City.
An ancient Mayan hieroglyphic script is providing details on the life of a high priest, including his blood sacrifices and acts of penance. The text consists of 260 glyphs carved into a series of seashell earrings and manta ray stingers found inside a burial urn that contained the remains of the important Maya priest.

The urn was uncovered during excavations 11 years ago in Comalcalco, in southeastern Tabasco state.

The text covers 14 years in the life of a Maya priest who lived in the eighth century A.D. It includes references to blood sacrifices and acts of penance preceding the spring solstice. Maya priests used manta ray stingers to pierce their earlobes, tongue, forehead, penis and other parts of the anatomy, in painful, bloodletting sacrifices to induce a hallucinogenic state in which they believed they could talk to their gods, INAH said.

One of the glyphs refers to the equivalent modern date of January 31, 771.

Click here for the AFP article.
Posted by Gregory LeFever at 12:09 PM

I went to a museum in Londres some days ago and I saw some sculptures and statues as this one in the blog , so the information explain a lot of important things and can be so cool read and saw some of these ones.