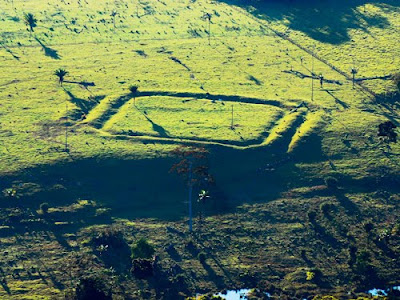 Geoglyphs such as this on the Brazilian border are about 2000 years old.
Traces of a previously unknown ancient civilization are emerging from beneath the felled trees straddling Brazil's border with Bolivia.
The traditional view is that before the arrival of the Spanish and Portuguese in the 15th century, there were no complex societies in the Amazon basin. Now deforestation, air travel and satellite imagery are indicating otherwise.
"It's never-ending," says Denise Schaan of the Federal University of Pará in Belém, Brazil. "Every week we find new structures."
Some of them are square or rectangular, while others form concentric circles or complex geometric figures such as hexagons and octagons connected by avenues or roads. The researchers describe them all as geoglyphs.

According to New Scientist:

Their discovery, in an area of northern Bolivia and western Brazil, follows other recent reports of vast sprawls of interconnected villages known as "garden cities" in north central Brazil, dating from around AD 1400. But the structures unearthed at the garden city sites are not as consistently similar or geometric as the geoglyphs, Schaan says.
"I firmly believe that the garden cities of Xingu and the geoglyphs were not directly related," says Martti Pärssinen of the Finnish Cultural and Academic Institutes in Madrid, Spain, who works with Schaan. "Nevertheless, both discoveries demonstrate that [upland] areas of western Amazonia were heavily populated much before the European incursion."

The geoglyphs are formed by ditches up to 11 metres wide and 1 to 2 metres deep. They range from 90 to 300 metres in diameter and are thought to date from around 2000 years ago up to the 13th century.
Click here for the New Scientist article.
Posted by Gregory LeFever at 3:15 AM