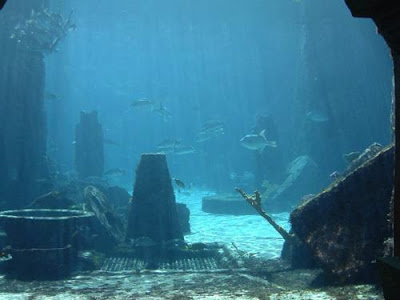 Scholarly debate continues to heat up over the possibility that Sardinia is the lost isle of Atlantis. Generally believed to have been located ~ if Atlantis really existed at all ~ somewhere in the Atlantic Ocean, recent research by Italian journalist Sergio Frau has named Sardinia as the locale of the mythic realm.
Though Frau’s book ~ entitled The Pillars of Hercules ~ has sold well over 30,000 copies to date, a group of 250 Italian academics have drawn up a position paper dismissing Frau’s theory and claiming it damages Sardinian history by sensationalizing it.
Now, however, the United Nations Educational, Scientific and Cultural Organization (UNESCO) is saying Frau’s idea bears further investigation. It has pulled together archeologists, academics, geologists and historians to determine the direction of future studies regarding Atlantis. According to the Malta Independent:

A catastrophic event is thought to have struck Sardinia during the Bronze Age, around 1178-1175 BC . Although Plato dated Atlantis to 9,000 years before his time, many historians think he meant 900 years.
Click here for the complete Malta Independent article.
Posted by Gregory LeFever at 3:25 PM

I am still laughing about: "a group of 250 Italian academics have drawn up a position paper dismissing Frau’s theory and claiming it damages Sardinian history by sensationalizing it.". The 250 persons include students and beginners in the world of archaeology, so I wouldn't call them "academics". In addition, Frau's theory, studied by UNESCO, is the same theory showed by other scholars such as Robert Paul Ishoy or professor Rosario Vieni.

Hello, Anonymous: Thank you for your insights. I can only trust your word regarding the 250 people disputing the idea. As for me, I'm pleased that the pursuit of Atlantis is receiving reputable backing because, as you know probably better than I, a number of other hypothetical sites have been ruled out in recent years, so the scope of the search is narrowing and definitely seems to still include Sardinia.

Thank you for visiting and helping clarify the matter.