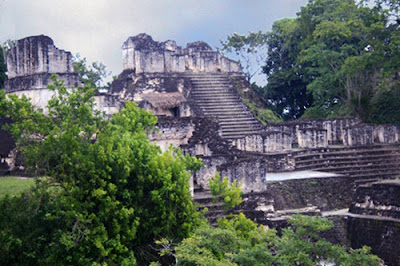 
Deforestation and damage to the agricultural system caused collapse of the Mayan civilization, according to a leading U.S. archaeologist.
“It was a collapse and not an abandonment, because the second is temporary, while the first represents an abandonment over the long term and the destruction of the social and economic system that maintains a state, as occurred in the region,” Dr. Richard D. Hansen said at the opening of the 3rd International Congress on Mayan Culture this week in the Caribbean city of Merida.
Hansen, senior scientist at the Institute for Mesoamerican Research in the Department of Anthropology at Idaho State University, said that the fall of cities including Nakbe, Wakna and Tintal occurred toward the end of the Pre-classic period due to the excessive exploitation of natural resources.

This was similar to what occurred at the end of the Classic period (AD 300-900) in cities such as Palenque, Copan and Tikal, due to environmental damage stemming from the excessive cutting of trees for fuel and production of stucco with which they covered the buildings.

He went on to say that the “‘conspicuous’ consumption of natural resources caused deforestation and damage to the agricultural system, which hindered cultivation of enough food to maintain a population that during that period reached around 1 million residents throughout the Basin.”

Hansen said his conclusion follows 30 years of study during which he collected archaeological evidence ~ including pollen, isotopes, ceramics, among other things ~ that allowed him to verify the environmental depredation.
Click here for the article.
Posted by Gregory LeFever at 8:51 PM