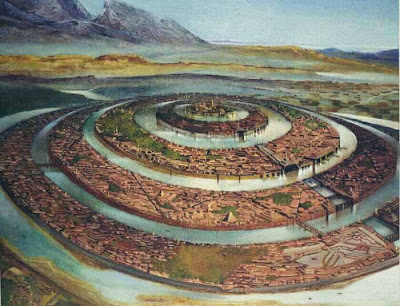 Artist's conception of Atlantis's multiple rings.
Researchers using satellite views of an ancient city submerged in southern Spain’s marshlands are claiming they may have located Atlantis. The site is 60 miles inland, just north of Cadiz. Following the researchers' scenario, a giant tsunami would have destroyed Atlantis millennia ago.
They believe the site may be Atlantis because it fits the age-old description of a multi-ringed metropolis, according to Richard Freund of the University of Hartford, Connecticut, the professor leading an international team searching for the true site of Atlantis.
Freund's discovery in central Spain of a strange series of “memorial cities” ~ built in Atlantis's image by its refugees after the city's destruction ~ gave researchers added proof, they say. Atlantis residents who did not perish in the tsunami fled farther inland and built new cities there.
While it is hard to know with certainty that the site in Spain in Atlantis, Freund said the finding the memorial cities makes him confident Atlantis was buried in the mud flats on Spain's southern coast. “We found something that no one else has ever seen before, which gives it a layer of credibility, especially for archeology, that makes a lot more sense,” he says.
Plato wrote about Atlantis some 2,600 years ago, describing it as “an island situated in front of the straits which are by you called the Pillars of Hercules,” as the Straits of Gibraltar were known in antiquity.
Click here for the Reuters article.
Posted by Gregory LeFever at 3:09 PM

Media hype is lame. Reporting it, even lamer.

It will be really hard to identify Atlantis by archaeological means. However, we have different approaches that can be more fruitful, such as the study of myths or the megalithic art. My own research also points towards Iberia, as the center of a much larger territory stretching from Orkney to Canary Islands. We have the megalith builders and we have the story of Plato... can you see the link?