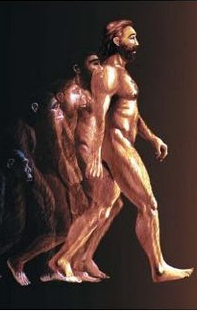 Scholarly debate surrounds when “archaic Homo sapiens” emerged as the modern version of humans. American Scientist recently explored the topic in an article, “Refuting a Myth About Human Origins” by John J. Shea, professor of anthropology at Stony Brook University and a research associate with the Turkana Basin Institute in Kenya.

Shea delineates the various findings and frequently references his own take on the situation, as in:

For me, the most surprising aspect about the debate regarding when Homo sapiens became human is that archaeologists have not tested the core hypothesis that there were significant behavioral differences between the earliest and more recent members of our species. Because modernity is a typological category, it is not easy to test this hypothesis. One is either behaviorally modern or not. And, not all groups classified as behaviorally modern have left clear and unambiguous evidence for that modernity at all times and in all contexts. For example, expedient and opportunistic flintknapping of river pebbles and cobbles by living humans often creates stone tools indistinguishable from the pebble tools knapped by Homo habilis or Homo erectus. This similarity reflects the nature of the tool-making strategies, techniques and raw materials, not the evolutionary equivalence of the toolmakers. Thus, the archaeological record abounds in possibilities of false-negative findings about prehistoric human behavioral modernity.

Click here for the complete article.
Posted by Gregory LeFever at 11:30 AM

How can self-professed scholars be so ignorantly black-and-white to even pose such ill-posed and fruitless questions? (I'm not attacking you the messenger, Gregory, just those that make a career out of posing infantile questions. The "History Channel scholars", as I like to call them. All sensationalism and no substance.)

The way I vision it, it's more than clear that humanity is a multidimensional spectrum and thus by its nature can have no scientific "startpoint". The question is immediately airy-fairy.

It's the same sort of wasted debate that goes on and on about the origin of "human language", again, as if to pretend that there can be some singular point that suddenly makes communication "human".

It strikes me that these debates are so obtuse that they must have a hidden agenda, such as religious fundamentalism to interfere with true science and true debate.

Very interesting comments, Glen. I agree. As you know better than I, the 'History Channel scholars' ~ I appreciate the term you've coined ~ tend to approach history in a highly linear fashion that belies considerable archaeological evidence to the contrary.