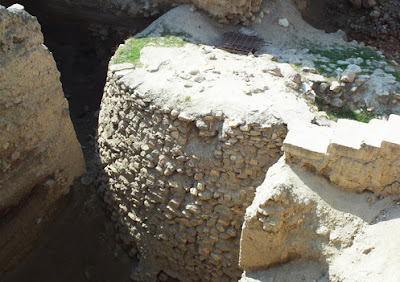 Section of ruins of Neolithic tower at Tel Jericho.
Two archaeologists from Tel Aviv University believe the purpose of the mysterious stone tower at Tel Jericho ~ one of the earliest stone monuments yet discovered in the human history ~ is linked to the summer solstice.
According to Live Science:

Now, after studying how the sun setting on the summer solstice, the longest day of the year, interacted with the tower and the landscape around it, two archeologists from Tel Aviv University have concluded the 28-foot (8.5 meter) tower symbolized power and might.

"We suggest that the tower was built not just as a marker or a time-keeping device, but as a guardian against the dangers present in the darkness cast by a dying sun's last rays of light," write the researchers, Roy Liran and Ran Barkai, in the journal Antiquity. (After the summer solstice, the nights begin to grow longer.)

Their reconstruction revealed that, as the solstice sun set, the shadow of a hill to the west fell exactly on the Jericho tower before covering the village, suggesting the monument and the start of longer nights were linked.

The tower was built approximately 11,000 years ago as hunter-gatherer society in the region was moving toward an agricultural society.
"This was a time when hierarchy began and leadership was established," Barkai told the Jerusalem Post. "We believe this tower was one of the mechanisms to motivate people to take part in a communal lifestyle."
Click here for the Live Science article.
Posted by Gregory LeFever at 1:09 PM