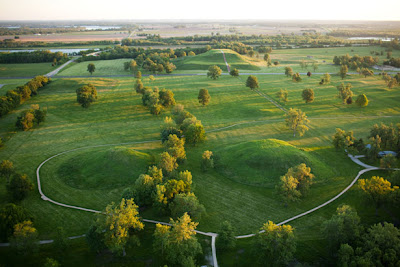 Cahokia originally covered six square miles.
The mystery of the Cahokia Mounds ~ especially the neglect this incredibly historic site in western Illinois has endured ~ is the topic of a recent National Geographic article, “America’s Forgotten City.” It’s well worth reading. An excerpt:

Cahokia Mounds may not be aesthetically pristine, but at 4,000 acres (2,200 of which are preserved as a state historic site), it is the largest archaeological site in the United States, and it has changed our picture of what Indian life was like on this continent before Europeans arrived.

Cahokia was the apogee, and perhaps the origin, of what anthropologists call Mississippian culture—a collection of agricultural communities that reached across the American Midwest and Southeast starting before A.D. 1000 and peaking around the 13th century. The idea that American Indians could have built something resembling a city was so foreign to European settlers, that when they encountered the mounds of Cahokia—the largest of which is a ten-story earthen colossus composed of more than 22 million cubic feet of soil—they commonly thought they must have been the work of a foreign civilization: Phoenicians or Vikings or perhaps a lost tribe of Israel.

Even now, the idea of an Indian city runs so contrary to American notions of Indian life that we can't seem to absorb it, and perhaps it's this cognitive dissonance that has led us to collectively ignore Cahokia's very existence. Have you ever heard of Cahokia? In casual conversation, I've found almost no one outside the St. Louis area who has.

If deciphering the story of history is contentious, try coming to agreement on the story of prehistory. 'You know what they say,' says Bill Iseminger, an archaeologist who has worked at Cahokia for 40 years. 'Put three archaeologists in a room and you get five opinions.'"


Click here for the complete article.
Posted by Gregory LeFever at 11:10 AM

I can't imagine in the 21st century why anyone would still think that Native cities are strange. Of course the 19th century though was full of elitist prejudice like this and I've glanced through a few of these vintage books at my local university for a chuckle. I'm sure everyone has heard by now of the Aztec civilization to the south of this.

That picture of the mounds, by the way, is so beautiful. I'm going to make it my desktop background.