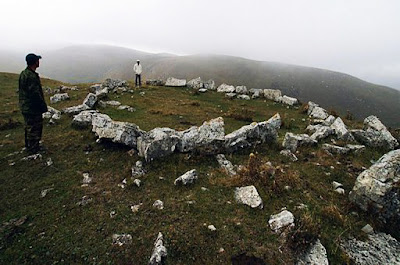 Site ancient settlement high in Caucasus Mountains.
Researchers have discovered traces of a previously unknown Bronze Age civilization in the peaks of Russia's Caucasus Mountains, using aerial photographs taken 40 years ago.
"We have discovered a civilization dating from the 16th to the 14th centuries BC, high in the mountains south of Kislovodsk," Andrei Belinsky, the head of a joint Russian-German expedition that has been investigating the region for five years, told AFP.
He said researchers had discovered stone foundations, some up to 3.3 feet high, at nearly 200 sites, all "visibly constructed according to the same architectural plan, with an oval courtyard in the centre, and connected by roads."
The decorations and forms of bronze items found in the area indicate the civilization is linked to the Kuban civilization, which was discovered at the end of the 19th century at the foot of Mount Kazbek and is known for its artistic bronze works.
Click here for the complete PhysOrg.com article.
Posted by Gregory LeFever at 7:43 PM