Far From Brutes, Neanderthals Had Compassion 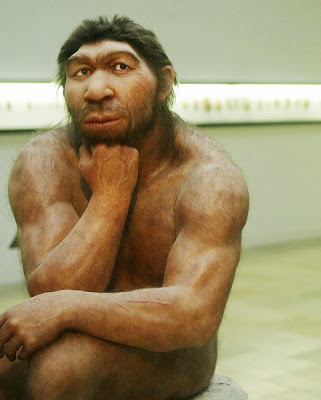 Neanderthal reconstruction in Prehistoric Museum of Halle, Germany.
New research indicates Neanderthals displayed “a deep seated sense of compassion” and were not the dumb brutes often depicted in archaeological lore.
“Compassion is perhaps the most fundamental human emotion,” researcher Penny Spikins of the University of York tells Discovery News. “It binds us together and can inspire us but it is also fragile and elusive. This apparent fragility makes addressing the evidence for the development of compassion in our most ancient ancestors a unique challenge, yet the archaeological record has an important story to tell about the prehistory of compassion."
Based on fossils, artifacts and other evidence, the scientists propose a four-stage model for the development of human compassion:

The first stage began six million years ago, according to the scientists, when the common ancestor of humans and chimpanzees experienced the initial awakenings of an empathy for others and motivation to help them, perhaps with a gesture of comfort, or moving a branch to allow them to pass.

The second stage from 1.8 million years ago sees compassion in Homo erectus beginning to be regulated as an emotion integrated with rational thought. Care of sick individuals represented an extensive compassionate investment while the emergence of special treatment of the dead suggested grief at the loss of a loved one and a desire to soothe others feelings, the researchers conclude.

The third stage, based on findings from Europe between around 500,000 and 40,000 years ago, sees humans such as Homo heidelbergensis and Neanderthals developing deep-seated commitments to the welfare of others illustrated by a long adolescence and a dependence on hunting together. There is also archaeological evidence of the routine care of the injured or infirm over extended periods. These include the remains of a child with a congenital brain abnormality who was not abandoned, but lived until five or six years old. The researchers also note that there was a Neanderthal with a withered arm, deformed feet and blindness in one eye who must have been cared for, perhaps for as long as twenty years.

“We have traditionally paid a lot of attention to how early humans thought about each other,” Spikins adds, “but it may well be time to pay rather more attention to whether or not they ‘cared.’”
Click here for the complete Discovery News article.
Posted by Gregory LeFever at 8:04 PM