Demise of Mystery Legion May Have Been Mundane 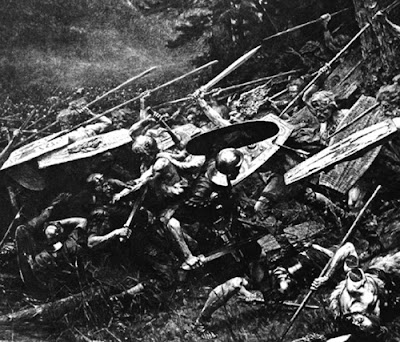 Rome’s legendary Ninth Legion ~ Legio IX Hispana, or the “Spanish Legion” ~ was one of the oldest and most feared units in the Roman army by the 2nd century AD. Raised by Pompey in 65 BC, it fought victorious campaigns from Gaul to Africa, Sicily to and Spain, and Germania to Britain.
But sometime after 108 AD, the legion disappeared from the records. The popular version of events is that the Ninth ~ numbering some 4,000 men ~ was sent to vanquish the Picts of modern day Scotland and mysteriously never returned.
According to Heritage Key:

The real explanation is very likely much more mundane ~ the unit was probably either simply disbanded, or continued to serve elsewhere, before finally being destroyed at another battle some years later. The myth, as is so often the case, tends to overshadow the truth.

Legio IX Hispana was put together in Spain alongside the Sixth, Seventh and Eight Legions in 65 BC, and first came under the command of Julius Caesar then the Governor of Further Spain, in 61 BC.

Expert at inspiring loyalty in his troops, he found one of his most devoted veteran armies in the Ninth. Although no record of the legion’s emblem exists, we can deduce that it was probably a bull, like all of Caesar’s faithful legions.

It served in Gaul throughout the Gallic Wars from 58-51 BC, and during Caesar’s Civil War against Pompey and the Senate from 49-48 BC. Victory at Pharsalus was decisive in ensuring Caesar’s ultimate grip on the Republic, and the Ninth played a key role. He repaid its service by ~ after his African campaign of 46 BC, and ultimate triumph at the Battle of Thapsus ~ disbanding the legion, and settling its veterans at Picenum and Histria.

The one certainty is that Legio IX Hispana had been disbanded or wiped out altogether by the reign of Marcus Aurelius (161-180), because a listing of active legions by that Emperor makes no mention of the Ninth.
Click here for the complete article.
Posted by Gregory LeFever at 7:12 PM

Warfare is a fascinating subject. Despite the dubious morality of using violence to achieve personal or political aims. It remains that conflict has been used to do just that throughout recorded history.

Your article is very well done, a good read.