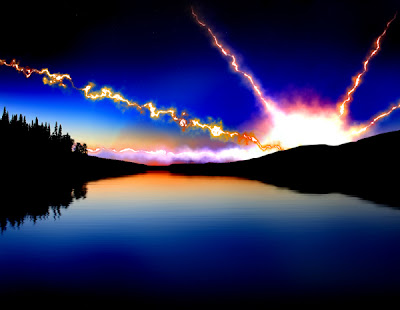 There simply is no evidence that a comet created a cataclysm that wiped out the Clovis people, the earliest known culture in North America, according to two archaeologists who have studied the situation.
Archaeologists David Meltzer of Southern Methodist University and Vance Holliday of the University of Arizona argue that there is nothing in the archaeological record to suggest an abrupt collapse of Clovis populations.
“Whether or not the proposed extraterrestrial impact occurred is a matter for empirical testing in the geological record,” they write in the October issued of Current Anthropology magazine. “In so far as concerns the archaeological record, an extraterrestrial impact is an unnecessary solution for an archaeological problem that does not exist.”
According to PhysOrg.com:

The comet theory first emerged in 2007 when a team of scientists announced evidence of a large extraterrestrial impact that occurred about 12,900 years ago. The impact was said to have caused a sudden cooling of the North American climate, killing off mammoths and other megafauna.

It could also explain the apparent disappearance of the Clovis people, whose characteristic spear points vanish from the archaeological record shortly after the supposed impact. As evidence for the rapid Clovis depopulation, comet theorists point out that very few Clovis archaeological sites show evidence of human occupation after the Clovis.

At the few sites that do, Clovis and post-Clovis artifacts are separated by archaeologically sterile layers of sediments, indicating a time gap between the civilizations. In fact, comet theorists argue, there seems to be a dead zone in the human archaeological record in North America beginning with the comet impact and lasting about 500 years.

But Meltzer and Holliday argue that a lack of later human occupation at Clovis sites is no reason to assume a population collapse. “Single-occupation Paleoindian sites ~ Clovis or post-Clovis ~ are the norm,” Holliday said. That's because many Paleoindian sites are hunting kill sites, and it would be highly unlikely for kills to be made repeatedly in the exact same spot.
Click here for the complete article.
More discussion of the issue on Anthropology.net blog.
Posted by Gregory LeFever at 6:45 PM