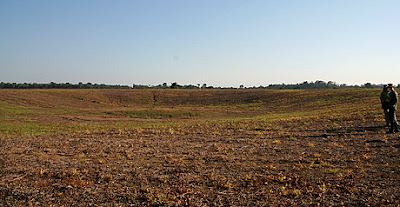 One of the depressions near Santarém, possibly an ancient reservoir.
Pre-Columbian Indian societies that once lived in the Amazon rainforests may have been much larger and more advanced than researchers previously realized, according to archaeologists from Brazil. Working with archaeologists from the University of Gothenburg, the team has located the remains of approximately 90 settlements in an area near the city of Santarém in the Brazilian part of the Amazon.
“The most surprising thing is that many of these settlements are a long way from rivers, and are located in rainforest areas that extremely sparsely populated today,” says Per Stenborg from the Department of Historical Studies, who led the Swedish part of the archaeological investigations in the area over the summer.
According to BioScholar:

Traditionally archaeologists have thought that these inland areas were sparsely populated also before the arrival of the Europeans in the 16th and 17th centuries. One reason for this assumption is that the soils found in the inland generally is quite infertile; another reason is that access to water is poor during dry periods as these areas are situated at long distances from the major watercourses.

It has therefore been something of a mystery that the earliest historical account; from Spaniard Francisco de Orellana’s journey along the River Amazon in 1541-42, depicted the Amazon as a densely populated region with what the Spanish described as “towns,” situated not only along the river itself, but also in the inland.

The archaeologists have come across areas of very fertile soil scattered around the otherwise infertile land. These soils are not natural, but have been created by humans.
“Just as importantly, we found round depressions in the landscape, some as big as a hundred metres in diameter, by several of the larger settlements,” says Stenborg. “These could be the remains of water reservoirs, built to secure water supply during dry periods.”
Click here for the complete article.
Posted by Gregory LeFever at 6:39 PM