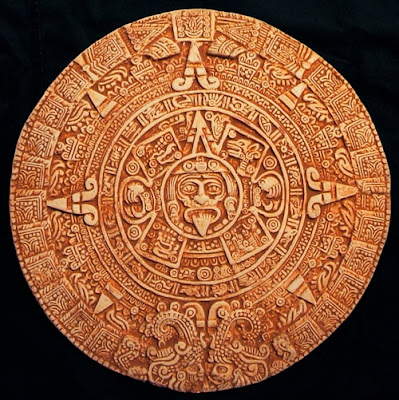 The Mayan Long Count calendar likely doesn’t end on December 21, 2012  ~ the date hyped by many apocalyptic thinkers ~ according to new research into the technique for translating the ancient calendar into Gregorian calendar years.
The research also contends that the actual end date of the Mayan calendar is essentially unknown within at least a 100-year span. In fact, the Mayan calendar may have already ended.
According to LiveScience:

A new critique, published as a chapter in the new textbook Calendars and Years II: Astronomy and Time in the Ancient and Medieval World (Oxbow Books, 2010), argues that the accepted conversions of dates from Mayan to the modern calendar may be off by as much as 50 or 100 years. That would throw the supposed and overhyped 2012 apocalypse off by decades and cast into doubt the dates of historical Mayan events. (The doomsday worries are based on the fact that the Mayan calendar ends in 2012, much as our year ends on Dec. 31.)

The Mayan calendar was converted to today's Gregorian calendar using a calculation called the GMT constant, named for the last initials of three early Mayanist researchers. Much of the work emphasized dates recovered from colonial documents that were written in the Mayan language in the Latin alphabet, according to the chapter's author, Gerardo Aldana, professor of Chicana and Chicano Studies at the University of California.

Later, the GMT constant was bolstered by American linguist and anthropologist Floyd Lounsbury, who used data in the Dresden Codex Venus Table, a Mayan calendar and almanac that charts dates relative to the movements of Venus.

"He took the position that his work removed the last obstacle to fully accepting the GMT constant," Aldana said in a statement. "Others took his work even further, suggesting that he had proven the GMT constant to be correct." But according to Aldana, Lounsbury's evidence is far from irrefutable.
Click here for the complete article.
Posted by Gregory LeFever at 2:32 PM

Well Hell! I have to make other plans then.

Wondering how much they're worth ?I have two of them