Were Puebloans Victims of Cultural Brutality? 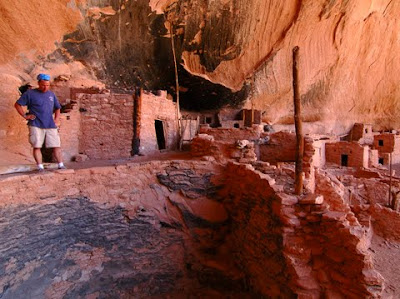 Wilcox examines an Arizona cliff dwelling known as Keet Seel.
Anthropologist Michael Wilcox argues in his new book, The Pueblo Revolt and the Mythology of Conquest, that the story of Native peoples in New Mexico has more to do with cultural brutality than disease.
In the book he calls on fellow scholars to embrace a new approach ~ "indigenous archaeology" ~ to understand Native American history by seeing the connections between artifacts and other scientific evidence and the narratives of living indigenous peoples. In doing so, he argues, archaeologists could better explain why indigenous populations persist. According to the Stanford University News:
Wilcox's new book is a story within a story. The first story recounts the Pueblo Revolt of 1680 ~ the only successful expulsion of colonialists in the Americas at the hands of Native Americans. His retelling is based on a reexamination of primary documents and his own archaeological excavations at Old Cochiti, south of Santa Fe in New Mexico. In the second story, he shows how the conquest history favored by historians, anthropologists and archaeologists fails to explain why the Puebloan people succeeded in their revolt and persist today.
"I always joke that Indians have been disappearing longer than almost any group in history," said Wilcox. "The presence of four and a half million Native Americans in the United States is a complete mystery to most people. There is no story that explains what they are still doing here."


Click here for the complete article and a video.
Posted by Gregory LeFever at 4:01 PM