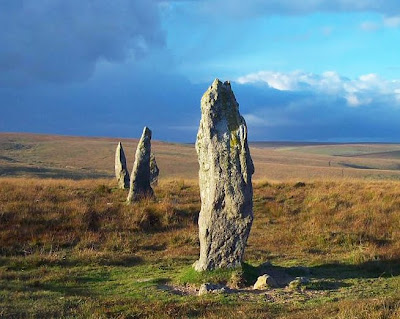 Some of the few megaliths still standing at Dartmoor.
Nine megaliths in a remote part of Dartmoor, England, may shed light on the meaning behind prehistoric stone megaliths such as Stonehenge. The Dartmoor stones were recently carbon-dated to around 3500 BC, and likely predate Stonehenge. Both sites feature standing stones aligned to mark the rising of the midsummer sun and the setting of the midwinter sun.
Archaeologist Mike Pitts says that "huge quantities of barbecued juvenile pig bones" were found near Stonehenge, indicating that the animals were born in the spring and killed not far from the site "for pork feasting" in midwinter.
According to Discovery News:

"The general feeling is that the sun was symbolizing or marking the occasion, rather than being the ritual focus itself, so it probably was not sun worship," added Pitts, who is author of the book "Hengeworld" and is one of the leading experts on British megaliths. This feasting was not just a meaningless pork party, and might have been more akin to a post-funeral wake today.

Pitts believes the "solstice alignment phenomenon perhaps has something to do with death." As he explains it, the setting sun and shorter days of winter would have represented the passage into the darkness of the underworld, and the reverse as the days start to lengthen again.

"At Stonehenge," he continued, "the dark navy-colored bluestones may themselves represent ancestors or spirits from the underworld, while the big orangey-pink (before weathering) sarsens could reflect summer and light."

The Dartmoor megaliths are now lying flat. Their toppling has helped historians, however, since peat above and the below the stones permitted the carbon dating, extremely rare for such monuments.
Click here for the Discovery News article.
Posted by Gregory LeFever at 9:33 AM

In my opinion, the ceremony was indeed held at midwinter, but it was not about killing pigs, but kings. The pigs were killed to feed the attendants to the ceremony.

That's a completely fascinating theory, Manuel. It prompts me to look into the matter in greater depth. Your comments are often provocative, and I encourage my readers to visit your blog at http://onemysteryless.wordpress.com/ for more of your excellent thoughts!

I agree, from what read I doubt the ritual killing of pigs theory. You however would need to feed the participants coming to celebrate in Dartmoor.