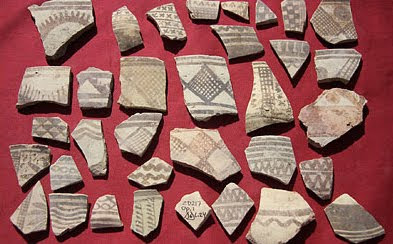 Archaeologists in northern Syria area researching prehistoric Mesopotamia to better understand what set the stage for the world’s first cities and the invention of writing.
According to the New York Times:

In two seasons of preliminary surveying and digging at the site known as Tell Zeidan, American and Syrian investigators have already uncovered a tantalizing sampling of artifacts from what had been a robust pre-urban settlement on the upper Euphrates River. People occupied the site for two millenniums, until 4000 B.C. ~ a little-known but fateful period of human cultural evolution.

Scholars say that Tell Zeidan should reveal insights into the Ubaid period ~ from 5500 to 4000 BC ~ when irrigation agriculture became widespread, long-distance trade grew, powerful political leaders arose and communities divided into social classes of wealthy elites and poorer commoners.
Click here for the complete article.
Posted by Gregory LeFever at 2:50 PM

“I figure I’m going to be working there till I retire". Haha. Mesopotamia is one of the oldest civilizations, what they accomplished millennium ago is still a great feat as seen from today's perspective. We still have a lot to unearth and know about them.