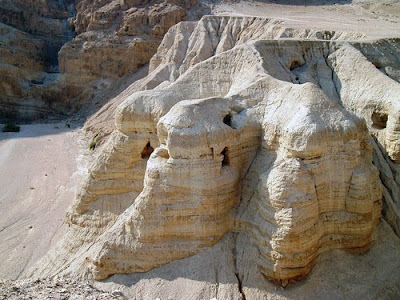 Caves where the scrolls were found in the remote area of Qumran.
Researchers including scholars and archaeologists continue to seek the identity of the authors of the Dead Sea Scrolls, more than 800 documents found in 1947 in the remote West Bank site known as Qumran. The scrolls contain previously unknown prayers, hymns, commentaries and other information ~ written between 300 BC and 70 AD ~ in what is generally considered one of the most important collections of religious texts in he Western world.
Smithsonian.com is featuring an excellent wrap-up of current scholarly thinking regarding authorship of the scrolls. Among the findings:

One assumption that is now widely accepted is that the majority of the scrolls did not originate at Qumran. The earliest texts date to 300 B.C.—a century before Qumran even existed as a settlement—and the latest to a generation before the Romans destroyed the site in A.D. 68. A few scrolls are written in sophisticated Greek rather than a prosaic form of Aramaic or Hebrew that would be expected from a community of ascetics in the Judean desert. And why would such a community keep a list, etched in rare copper, of precious treasures of gold and silver—possibly from the Second Temple in Jerusalem—that had been secreted away? Nor does the word “Essene” appear in any of the scrolls.

One conclusion is that the definitive answer to authorship likely will be resolved by “archaeologists scrutinizing Qumran’s every physical remnant (rather) than by scholars poring over the texts.”
Click here for the complete article.
Posted by Gregory LeFever at 4:37 PM