'Afterlife Door' from Tomb is Recovered 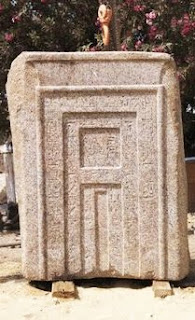 A large red granite false door that ancient Egyptians believed was the threshold to the afterlife has been recovered near the Karnak Temple in Luxor. The door belongs to the tomb of User, a powerful advisor to the 18th dynasty Queen Hatshepsut.

The door ~ measuring nearly six feet high and 19 inches thick ~ is engraved with religious texts and various titles used by User, including mayor of the city, vizier and prince, antiquities chief Zahi Hawass was quoted as saying.
"The newly discovered door was reused during the Roman period. It was removed from the tomb of User and used in the wall of a Roman structure," said Mansur Boraik, who headed the excavation mission.
Hatshepsut, who ruled Egypt between 1479 BC and 1458 BC, was the longest reigning female pharaoh.
Posted by Gregory LeFever at 4:30 AM