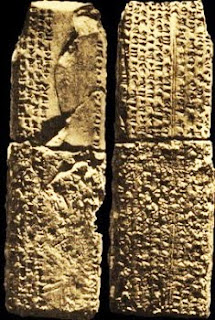 Small clay tablets found in the lost city of Ugarit in Syria are revealing an alphabet very similar to the Arabic and Greek alphabets, showing distinct links with Arabic in both word meanings and grammar.
The Ugaritic language ~ discovered by French archaeologists  in 1928 ~ is known only in writings found in the lost city of Ugarit, near the modern Syrian village of Ras Shamra. Their discovery has been termed “the greatest literary discovery from antiquity since the deciphering of the Egyptian hieroglyphs and Mesopotamian cuneiform.”
According to the Global Arab Network:
It has been extremely important for scholars of the Old Testament in clarifying Biblical Hebrew texts and has revealed more of the way in which ancient Israelite culture finds parallels in the neighboring cultures.
Literary texts discovered at Ugarit include the Legend of Keret, the Aqhat Epic (or Legend of Danel), the Myth of Baal-Aliyan, and the Death of Baal ~ the latter two are also collectively known as the Baal Cycle ~ all revealing a Canaanite religion.
Click here for the complete article.
Photo shows some recovered Ugarit tablets.
Posted by Gregory LeFever at 5:48 PM