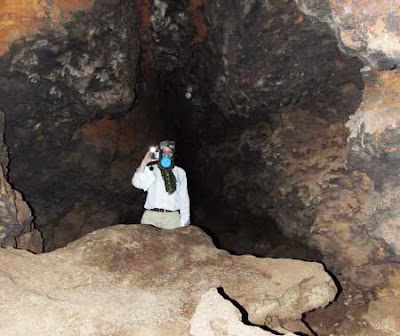 An explorer peers into caves and tunnels beneath the pyramid field.
An enormous system of caves, chambers and tunnels lies beneath the Pyramids of Giza, according to a British explorer who claims to have found the lost underworld of the pharaohs.

"There is untouched archaeology down there, as well as a delicate ecosystem that includes colonies of bats and a species of spider which we have tentatively identified as the white widow," British explorer Andrew Collins told Discovery News.

He details his findings in the book Beneath the Pyramids to be published in September. He says he tracked down the entrance to the mysterious underworld after reading the forgotten memoirs of a 19th century diplomat and explorer.
"In his memoirs, British consul general Henry Salt recounts how he investigated an underground system of 'catacombs' at Giza in 1817 in the company of Italian explorer Giovanni Caviglia," Collins said.

According to Collins, the caves ~ which may be hundreds of thousands of years old ~ may have both inspired the development of the pyramid field and the ancient Egyptian's belief in an underworld.

"Ancient funerary texts clearly allude to the existence of a subterranean world in the vicinity of the Giza pyramids," Collins says.

Posted by Gregory LeFever at 6:12 PM