Beads Were Earliest Form of Adornment 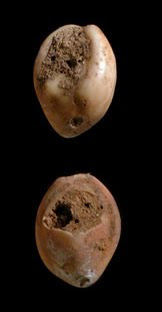 These beads add to similar finds dating back as far as 110,000 years ago in Algeria, Morocco, Israel and South Africa, confirming beads as the oldest form of personal ornaments. The findings and conclusions were reported last week in the Proceedings of the National Academy of Sciences of the USA (PNAS).
A team of researchers recovered 25 marine shell beads dating back to around 70,000 to 85,000 years ago from sites in Morocco, as part of the European Science Foundation EUROCORES programme 'Origin of Man, Language and Languages'. The shells have man-made holes through the centre and some show signs of pigment and prolonged wear, suggesting they were worn as jewellery.

"Either people went to sea and collected them, or more likely marine shell beads helped create and maintain exchange networks between coastal and inland peoples. This shows well-structured human culture that attributed meaning to these things," said Francesco d'Errico, lead author and director of research at the French National Centre for Scientific Research (CNRS).

For scientists, beadworks are not simply decoration, they also represents a specific technology that conveys information through a shared coded language.

"The early invention of the personal ornament is one of the most fascinating cultural experiments in human history," d'Errico continued. "The common element among such ornaments is that they transmit meaning to others. They convey an image of you that is not just your biological self."