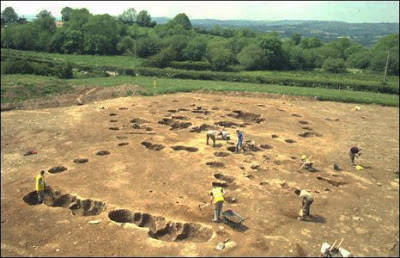 Archaeologists unearth the remains of the timber circles.
Remains of a 4,000-year-old ritual circle in Tyrone County, Northern Ireland, are being deemed especially rare because the site was made of timber and not stone.

“The specific use of timber circles is not well understood but it is thought that they were used as ritual sites, perhaps for feasting or for commemorating the dead," archaeologist Kirsty Dingwall told the BBC. She said radiocarbon dating had confirmed that the site dates to the middle of the third millennium BC.

She said it was "made up of two concentric rings of timbers focussed on a central area, which appear to have replaced an earlier series of large pits".

“It had a large monumental porch on one side with a line of substantial timbers along the front, which would have formed an impressive façade for anyone approaching the circle,” she added. "The outer ring of the double circle comprised pits holding four posts in a square arrangement, which would themselves have pinned sections of wattle or planked walling in place."

"As a result, we can be fairly certain that it would not be possible to see into the centre of the circle from the outside, unlike other timber circles elsewhere in the British Isles, or at stone circles such as Stonehenge in Wiltshire or Callanish in Scotland, where an observer would have had glimpses of the activity.

“As timber circles are generally thought to have some form of ritual importance, the issue of restricting the views of what was happening inside the circle is an interesting one," Dingwall said.

Click here for the complete BBC article.
Posted by Gregory LeFever at 9:04 PM