Could This Be the World's Earliest Map? 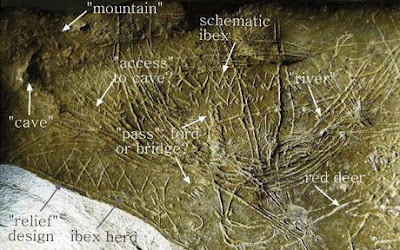 Portions of he 14,000-year-old map show surviving topographical features close to the cave where the stone tablet was discovered.
Estimated to be about 14,000 years old, a stone tablet found in a cave in northern Spain is believed to contain the earliest known representation of a landscape. The tablet is seven inches by five inches and less than an inch thick. It appears to depict mountains, rivers and areas of suitable foraging and hunting.

A team from the University of Zaragoza spent 15 years deciphering the etched lines and squiggles after unearthing the artifact in 1993.

"We can say with certainty that it is a sketch, a map of the surrounding area," said Pilar Utrilla, who led the research team. "Whoever made it sought to capture in stone the flow of the watercourses, the mountains outside the cave and the animals found in the area."

"The landscape depicted corresponds exactly to the surrounding geography, complete with herds of ibex marked on one of the mountains visible from the cave itself," she said.

The research, published in the latest edition of the Journal of Human Evolution, improves our understanding of early human capacities related to spatial awareness, planning and hunting.

"We can't be sure what was intended in the making of the tablet but it was clearly important to those who populated the cave 13,660 years ago," added Utrilla. "Nothing like this has been discovered elsewhere in western Europe."

Click here for the complete Guardian article.
Posted by Gregory LeFever at 3:48 AM