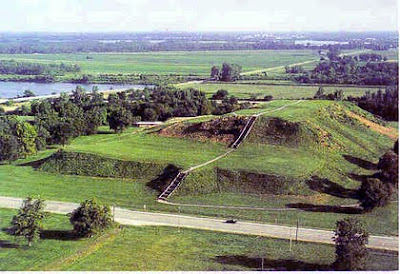 Portion of mounds still remaining at the Cahokia site.
An Illinois anthropologist contends the Midwest’s ancient Cahokian culture practiced mass human sacrifice, in contrast to the pastoral, nearly idyllic way the culture usually is depicted. Timothy R. Pauketat, a University of Illinois archaeologist and professor of anthropology, has described his findings in his new book, Cahokia: Ancient America’s Great City on the Mississippi.

According to an article in Sunday’s Belleville (Illinois) News-Democrat:

Ancient Cahokia, which reached its peak about 1150 A.D. with a population of 20,000, was a religious center of farmers and hunters that probably influenced much of what archaeologists call the Southeast Ceremonial Complex, a string of similar but smaller sites found from Illinois to northern Florida.
It was abandoned about 100 to 200 years later and its descendants are believed to be the various tribes from historic times. At the time of its zenith, Cahokia rivaled London in population and was America's most-populous city until Philadelphia eclipsed it in the 18th century.

. . . In this society, often referred to as the Mississippian Culture, women played much more of a role than convenient sacrificial victims, Pauketat said. And even in this death ritual, women were respected, unlike some of the men whose remains were found with heads lopped off. "The women never show injury,” he said. “There is no trauma. So that means either they drank poison or they were strangled. But, that's speculation. They were very carefully placed into these pits."

Pauketat said that at Cahokia, religion drew people from small farming villages across the region.
"People recognized in Cahokia a supernatural power on a scale and of a kind that was probably unknown in North America north of Mexico," he said.

Click here for the News-Democrat article.
Click here for a sensationalized review of the book in Salon.com.
Posted by Gregory LeFever at 7:37 PM