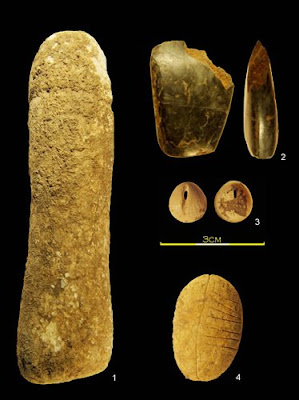 Phallic figurines, small axes, shell pendants and engraved tokens were among the many items recently unearthed at the unusual Neolithic burial site near Nazareth.
Archaeologists are somewhat perplexed over the burial practices in a recently discovered cemetery dating back to perhaps 8500 BC near Nazareth.

Called Kfar HaHoresh, the Stone Age graves contained an abundance of phallic figurines. Many of the human bones were arranged in unusual manners. The graves of at least 65 people – predominantly males between 20 and 30 years of age – were buried in a central cemetery long before such burial practices were common.

“This is not a regular site,” said archaeologist Avi Gopher of Tel Aviv University. “There are many burials and many of them are very unusual.”

For one, centrally located cemeteries were unknown in the region in that Stone Age period, yet Kfar HaHoresh seems to have served as a burial and cult center for surrounding villages.

During the era, most statue symbolism was female, in honor of the mother goddess of agriculture. “At Kfar HaHoresh, all the gender-oriented symbolism seems to be male,” said excavation leader Nigel Goring-Morris of Hebrew University.

One young male was found buried on top of the remains of seven wild cattle. Some of the children buried there were given the same treatment as adults, such as being buried with pendants and fox jaws. Several of the bodies had skulls removed after death. Some human bones were arranged to resemble the profiles of cattle and boars. The body of a 40-year-old man was manipulated into a foetal position.

Goring-Morris and some other archaeologists are speculating that the burial practices may reflect the transition from a hunter-gatherer to an agricultural society.

Posted by Gregory LeFever at 8:16 PM

It's early so it's still a bit tough for me to sign my name.