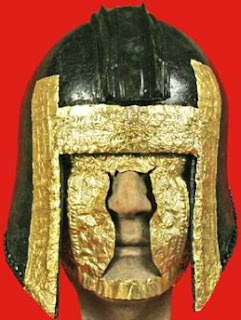 Forty-three graves dating from 650 BC have been unearthed near Pella in northern Greece, providing more extensive information about the Macedonian kingdom.
Of particular interest to archaeologists are 20 graves of warriors, some buried in bronze helmets alongside iron swords and knives. Their eyes, mouths and chests were covered with gold foil with depictions of lions and other animals symbolizing power.

"The discovery is rich in historical importance, shedding light on Macedonian culture during the Archaic period," Pavlos Chrysostomou, who headed the eight-year project that investigated a total of 900 graves, told Reuters.

Among the excavated graves, the team also found 11 women from the Archaic period, with gold and bronze necklaces, earrings and broaches.
Click here for the Reuters article.
Photo shows warrior helmet and burial faceplate from excavation.
Posted by Gregory LeFever at 10:45 AM