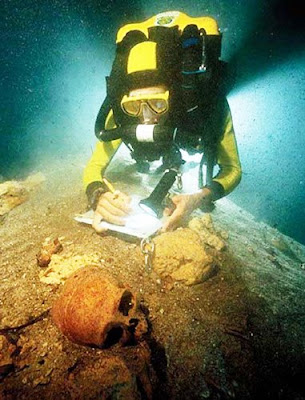 An archaeologist studies a human skull in an underwater cave along the Yucatan coast near where the remains of Eve and others were discovered.
Archaeologists believe they have discovered a 13,600-year-old human skeleton deep in a Caribbean underwater cave, making it the oldest ever found in the Americas. The discovery could have profound effects on theories of how humans first reached North America.

The female skeleton, called Eve of Naharon, was found with three other human skeletons in underwater caves along the coast of the Yucatan Peninsula. Excavation of a fourth skeleton – possibly even older than Eve – begins this month in a nearby cave.

“We don’t know how they arrived or whether they came from the Atlantic, the jungle or inside the continent,” said Arturo Gonzalez, leader of the team of scientists who have been excavating the area for four years. “The shape of the skulls has led us to believe that Eva and the others have more of an affinity with people from South Asia than North Asia.”

If he’s right, that could further contradict the theory that ancient humans first came to North America from northern Asia via an ancient land bridge across the Bering Sea. Human remains found in Chile in 1997 are at least 12,500 years old, a period in which the Bering bridge migration would not have been possible due to Arctic ice.

The three other skeletons found with Eve have been radiocarbon-dated from 11,000 to 14,000 years ago.

All were found in underwater caves about 50 feet below the surface. At the time Eve and the others would have lived there, the sea level was about 200 feet lower, and the Yucatan Peninsula was a dry prairie. Melting of the polar ice caps 9,000 years ago submerged the burial ground and the subsequent growth of stalactites and stalagmites kept the skeletons from being washed out to sea.

Click here for the National Geographic article.
Posted by Gregory LeFever at 9:33 AM