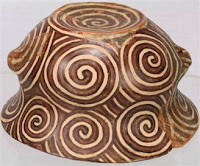 Creators of what may have been Europe’s first civilization produced artwork with lines, circles and spirals reminiscent of modern Op Art.

Archaeologists call the mysterious civilization "Cucuteni-Trypillians" after the villages of Cucuteni in Romania and Trypillia in the Ukraine, where the first discoveries of this ancient civilization were made more than 100 years ago. Those were pottery dating from 5000 to 3000 BC.

"We do not know the meaning of those painted symbols, and what is the significance of the zoomorphic and anthropomorphic statuettes,” says Lacramioara Stratulat, director of the Moldova National Museum Complex of Iasi. “Everything seems to be wrapped in mystery. Most of all, we do not know how these people treated their dead. Despite recent extensive excavations, no cemetery has ever been found.”
All Settlements Burned to the Ground

The pottery's obsessive spiral and circle patterns could also help explain another strange feature of this culture. "We do not know why, but all of the 4,000 Cucuteni-Trypillians settlements were intentionally burned," says Sergiy Krolevets, director of the National History and Culture Museum of the Republic of Moldova.

One explanation is that the Cucuteni might have seen the world as cyclical — a concept they might have expressed in the circles they painted on their pottery. According to this hypothesis, every 60 years or so, they would sacrifice whole cities by intentionally burning thousands of their houses. Then they would move to create another settlement.

Posted by Gregory LeFever at 3:49 PM

Hmmm.. burning settlements to the ground would be a great way to get rid of vermin that may have infiltrated the dwellings over the years. And mold, mildew, smell of humanity.

This is a good point, and probably true, but if that were the only cause of the behaviour it would be found wherever people live in verminous, mildewed wooden buildings - which it doesn't (much to the chagrin of the anthropologists who go to live in them). In the Cucuteni-Tripolye/Trypillian case, all the settlements were burnt, and it seems likely that these burnings were mass events, indicating that they weren't a simple reaction to the localised build-up of mildew, mold, human musk, or vermin, but were probably related to some cosmological notions now lost to us.
On the other hand, looking for answers in the patterning of ceramics may be a step too far. I'm not sure. The cyclical universe idea is in any case not unprecedented.