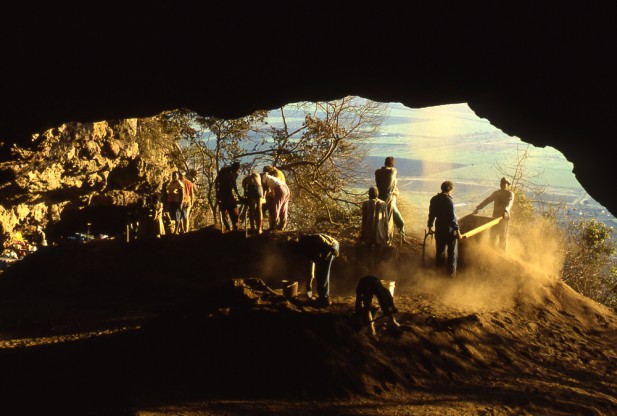 Archaeologists at Border Cave where the artifacts were found.


New findings indicate that the late Stone Age in Africa began about 20,000 years earlier than previously thought. Artifacts found in a cave reveal residents were carving bone tools, using pigments, making beads and even using poison 44,000 years ago.
Such artifacts had previously been linked to the San culture, which was thought to have emerged around 20,000 years ago. The Later Stone Age in Africa occurred at the same time as Europe's Upper Paleolithic Period, when modern humans moved into Europe from Africa and met the Neanderthals about 45,000 years ago.
According to LiveScience.com:

"Our research proves that the Later Stone Age emerged in South Africa far earlier than has been believed and occurred at about the same time as the arrival of modern humans in Europe,” says researcher Paola Villa of the Colorado Museum of Natural History. "The differences in technology and culture between the two areas are very strong, showing the people of the two regions chose very different paths to the evolution of technology and society."

Traces of civilization have been found going back nearly 80,000 years in Africa, but these fragments — bone tools, carved beads — vanish from the archaeological record by about 60,000 years ago.
Click here for the article.
Posted by Gregory LeFever at 12:50 PM