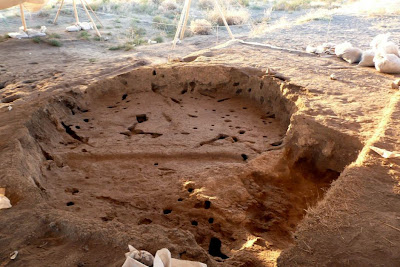 Archaeologists in Turkey are studying one of the major transformations in human history ~ the end of the nomadic lifestyle. A team headed by Dr Andrew Fairbairn from the University of Queensland is joining with a British team to continue excavating the 10,000-year-old village known as Boncuklu Höyük. The site is one of the earliest villages from the period when hunter-gatherers ceased their nomadic lifestyle to begin farming.

According to ABC News:

"It's come to be one of the key transformations in human history because, basically, the development of our civilisations is routed in a lot of these social and economic transformations that happened around about this time," Dr Fairbairn told ABC News Online.

He says the site is one of the earliest found just outside the key Fertile Crescent area of eastern Turkey, Syria and Jordan where it is thought farming first originated. The site is expected to help archaeologists understand how humans adapted to a sedentary lifestyle and how it spread across Europe.

"This farming lifestyle then spreads around the world - it goes across Europe and it goes across Asia," he said. "And so where Boncuklu is is that sort of first area where you have this spread of this new lifestyle.

"We've been very interested to find out whether it was, as it's always been suspected, due to farming people moving from this area of origin, the Fertile Crescent ... or whether it was due to the people who already lived there, lay hunter-gatherer societies, actually starting to develop and take up new crops and new ways of life. So Boncuklu is one of those very rare sites that allows us to investigate that time period."

Boncuklu Höyük means "beady mound." It was discovered about a decade ago by the head of the British excavation team, Dr Douglas Baird, who was trying to place the excavation of Çatalhöyük in its regional context and then found Boncuklu, which is 1,000 years older, on the last day of a field survey.
Click here for the complete article, plus a video.
Posted by Gregory LeFever at 4:48 PM