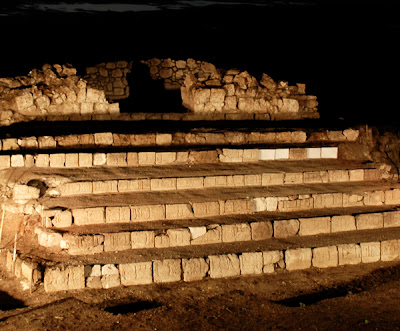 A section of the Guzman stairway at El Palmar.


Ancient Mayan writing continues to intrigue modern researchers and is now believed ~ through the use of magnificent pieces of art ~ to have been an important social act by which new kings established their place in their culture’s lineage.
The Maya told the stories of their parents, ancestors, founders, foes, captured enemies and military alliances on a variety of edifices, according to a recent National Geographic article, referring to Mayan writing as “ a unique feature of this culture that along with the perfection of their calendar has intrigued and mystified the world.”
It also states:

After the Classic period, there is a regional hiatus in writing, commemorative dates and construction.  This initially led to the notion of the Maya “Collapse”.  A term that has created more confusion than clarification since it implies the disappearance of a culture, but the Maya people never disappeared, and the term rather addresses a dissolution of government and society.  Although we still don’t know much about the causes of the “collapse”, the following Post-Classic period, dated between 900-1200 AD, was a time of major change.

Much of the article refers to the recently discovered Guzman hieroglyphic stairway at El Palmar in Campeche, Mexico. The pyramid that holds the stairway was built between the 7th and 8th Centuries AD and a few decades after its construction a total of 90 blocks containing Maya glyphs were added, creating a stairway of six steps leading to a temple on top of the pyramid.
Click here for the complete article.
Posted by Gregory LeFever at 8:41 AM