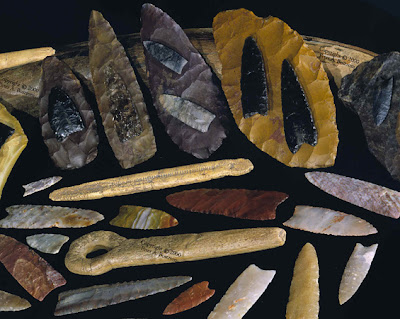 
Thousands of 15,500-year-old stone tools unearthed over the past several years prove that the Clovis culture was not the first human population in the Americas, according to archaeologists writing in a recent issue of Science magazine.
According to the BBC:

A number of digs across the Americas in recent decades had already hinted that the "Clovis first" model was in serious trouble. But the huge collection of well-dated tools excavated from a creek bed 60km (40 miles) northwest of Austin (Texas) mean the theory is now dead, argue the Science authors.

"This is almost like a baseball bat to the side of the head of the archaeological community to wake up and say, 'Hey, there are pre-Clovis people here, that we have to stop quibbling and we need to develop a new model for peopling of the Americas'," Michael Waters, a Texas A&M University anthropologist, told reporters.

Hunter-gatherers were thought to have crossed from Siberia into Alaska via a land bridge that became exposed when sea levels dropped. Evidence indicates this occurred as far back as about 13,500 years. But an increasing number of archaeologists have argued there was likely to have been an earlier occupation based on the stone tools that began turning up at dig sites with claimed dates of more than 15,000 years.
Click here for the complete article.
Posted by Gregory LeFever at 11:26 AM

I love when evidence like this comes to light. I remember sitting in an intro Archeology class two years ago and they were staring to bend on the dating settlement of the Americas a little but were very unwilling.