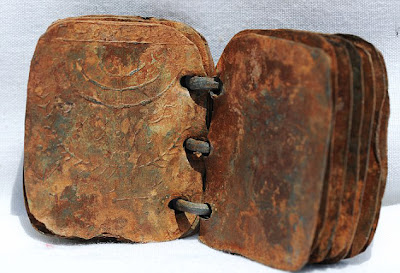 One of the ancient books, about the size of a credit card.
Their origin is still in question, but biblical scholars say that if 70 tiny ancient books are authentic, they may be as important as the Dead Sea Scrolls in understanding early Christianity.


**At least one biblical scholar has questioned the authenticity of these items. I'll post new evidence ~ pro or con ~ as the research continues.**

First discovered five years ago, the collection of books ~ their lead pages bound with wire ~ could unlock some of the secrets of the earliest days of Christianity. On pages not much bigger than a credit card, are images, symbols and words that appear to refer to the Messiah and possibly the Crucifixion and Resurrection.
Adding to the intrigue, many of the books are sealed, prompting academics to speculate they are actually the lost collection of codices mentioned in the Bible’s Book Of Revelation.
According to the London Daily Mail:

The books were discovered five years ago in a cave in a remote part of Jordan to which Christian refugees are known to have fled after the fall of Jerusalem in 70AD. Important documents from the same period have previously been found there.

Initial metallurgical tests indicate that some of the books could date from the first century AD. This estimate is based on the form of corrosion which has taken place, which experts believe would be impossible to achieve artificially. If the dating is verified, the books would be among the earliest Christian documents, predating the writings of St Paul.

David Elkington, a British scholar of ancient religious history and archeology, and one of the few to have examined the books, says they could be “the major discovery of Christian history.”

“It is a breathtaking thought that we have held these objects that might have been held by the early saints of the Church,’ he said.

The mysteries between their ancient pages are not the only riddle. Today, their whereabouts are also a mystery. After their discovery by a Jordanian Bedouin, the hoard was subsequently acquired by an Israeli Bedouin, who is said to have illegally smuggled them across the border into Israel, where they remain. However, the Jordanian Government is now working at the highest levels to repatriate and safeguard the collection.
Click here for the complete article.
Posted by Gregory LeFever at 7:00 PM