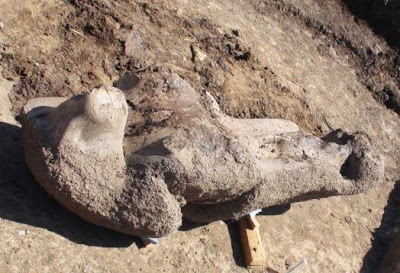 Upper portion of the newly discovered Thoth statue.
A colossal statue of the Egyptian deity of wisdom, Thoth, has been unearthed near the mortuary temple of Amenhotep III during archaeological works aimed at controlling the subterranean water level on Luxor's west bank, according to the London Independent.


The 3.5-metre red granite statue is one of several artifacts discovered in the area since excavations began. The head of a 2.5-metre statue depicting Pharaoh Amenhotep III in a standing position ~ possibly the best preserved depiction of the pharaoh’s face found to date ~ was unearthed at the King's funeral temple at Kom El-Hettan only months ago. A statue of the god Thoth in the shape of a baboon was also discovered. Last year two black granite statues of Amenhotep III were found at the temple, as well as a 5-metre statue similar to the Thoth statue just found.
Amenhotep III ruled Egypt between 1390 BC and 1352 BC, and recent DNA and forensic research suggests that he was probably the grandfather of Tutankhamun. His temple was built closer to the river than any other temple at Thebes and within 200 years it had collapsed.
Click here for the complete article.

Posted by Gregory LeFever at 5:56 PM