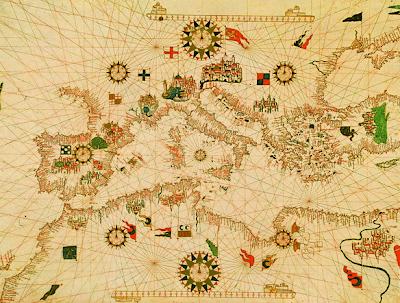 Section of the amazingly accurate 1559 map by Mateo Prunes.
One of the most mysterious topics in world history concerns a handful of maps depicting the world’s geography with a precision that far exceeded the tools and abilities of the day’s mapmakers. The Library of Congress this week convened a conference, “Re-Examining the Portolan Chart: History, Navigation and Science” to discuss maps originating about 1275. According to today’s Washington Post:

It is a rare representative of one of the world's greatest and most enduring mysteries: Where and how did medieval mapmakers, apparently armed with no more than a compass, an hourglass and sets of sailing directions, develop stunningly accurate maps of southern Europe, the Black Sea and North African coastlines, as if they were looking down from a satellite, when no one had been higher than a treetop?

The earliest known portolan (PORT-oh-lawn) chart, the Carta Pisana, just appears in about 1275 -- with no known predecessors. It is perhaps the first modern scientific map and contrasted sharply to the "mappamundi" of the era, the colorful maps with unrecognizable geography and fantastic creatures and legends. It bears no resemblance to the methods of the mathematician Ptolemy and does not use measurements of longitude and latitude.

And yet, despite it's stunning accuracy, the map "seems to have emerged full-blown from the seas it describes," one reference journal notes. No one today knows who made the first maps, or how they calculated distance so accurately, or even how all the information came to be compiled.

While maps such as the Carta Pisana are indeed worthy of in-depth research, I’m also drawn to even more mysterious examples, such as the Piri Reis map from 1513, which has been the topic of a couple of books, the most fun ~ even if perhaps not the most accurate ~ being Maps of the Ancient Sea Kings, first published by Charles Hapgood in 1966.
Click here for the Washington Post article.
Click here for more on the Piri Reis map.
Click here for a Wikipedia overview of ancient maps.
Posted by Gregory LeFever at 2:00 PM