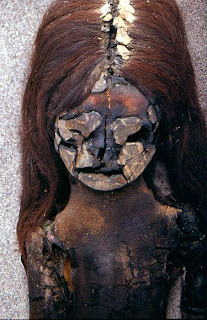 Arsenic in the drinking water killed many of Chile’s coastal Chinchorro people some 7,000 years ago, based on hair analysis of mummified remains.
"I believe these ancient people were continuously exposed to arsenic by drinking contaminated water with high arsenic levels endemic to the Camarones region," study leader Bernardo Arriaza tells National Geographic, which adds:
Some 7,000 years ago the Chinchorro became the first society known to practice mummification, which transcended social class and included adults, children, and even fetuses. Arriaza hypothesizes that fetuses and newborns were especially susceptible to arsenic.
Arriaza and colleagues studied hair samples from 46 ancient mummies previously found in five different sites throughout the arid valley. The results showed that nine of every ten Chinchorro mummies ~ ranging from 7,000 to 600 years old ~ had hair with arsenic levels of more than one microgram of arsenic per gram of hair, which is high enough to cause health problems.
Click here for the complete article.
Photo shows naturally mummified Chinchorro child.
Posted by Gregory LeFever at 6:00 PM

Very good post, thanks for sharing with us !!!
Sarchi