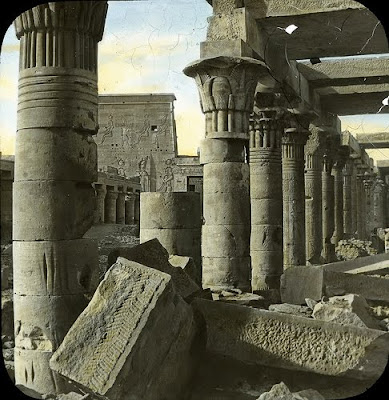 Philae Court with Temple of Isis in the background.
New translation of a 29 BC Roman victory stele bears the name of Octavian Augustus ~ the military commander who defeated Cleopatra and Mark Antony in the Battle of Actium ~ in a place traditionally reserved for the names of Egyptian Pharaohs. Historians generally believe that Octavian never was crowned as a pharaoh, even though he ruled over Egypt following Cleopatra’s suicide in 30 BC.
According to an article in Heritage Key:

The stele was erected at a time when Octavian was still paying lip service to restoring the Roman Republic. He would not be named “Augustus” by the Roman Senate until 27 BC. In the years following that, he would gradually acquire more power.

The victory stele is written in three languages (like the Rosetta Stone) - Egyptian hieroglyphics, Latin and Greek. It was erected by priests at the Temple of Isis at Philae, which is near the first cataract, the traditional border between Egypt and Nubia.

The stele has been known to scholars for about 100 years. However, the hieroglyphic writing is difficult to translate as the symbols are not clear on the stone.
Click here for the Heritage Key article.
Posted by Gregory LeFever at 7:30 PM