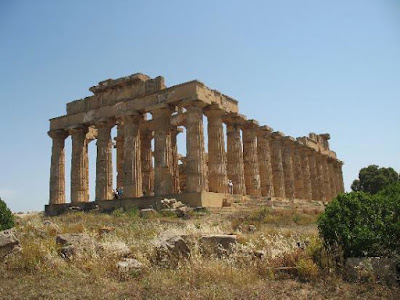 Ruins of Greek temple at Selinunte on Sicily.
Nearly all temples constructed on the island of Sicily during its Greek period 2,500 years ago are oriented toward the eastern horizon, according to a new study by Alun Salt, an archaeoastronomer with the University of Leicester in England.

Though many temples on mainland Greece also line up with the sunrise, it is less frequent on the mainland than on outlying colonies, implying an effort by outlying colonies to strengthen their ties to the home territory, Salt tells LiveScience.
"If you were a Greek living in the Greek homeland, you knew you were Greek. The Greeks in Sicily were Greeks living at the edge of their world. They may have felt they had something to prove," says Salt, who noted that most temples in Sicily were also built on a larger scale than those in Greece proper.

Temples were an important part of life in ancient Greece. Offerings to various gods were commonplace, as were rituals associated with the ancient Olympic Games. Temple ruins now dot the landscape of mainland Greece, with orientation favoring the sunrise in many, but not all.

Of the 41 temples in Sicily that date from the Greek period, however, only one of the doors doesn't face east, Salt found.

The phenomenon of east-facing temples may have been stronger in Sicily simply because doing things the "right" way helped forge a stronger bond with the mainland.

Sicily became a Greek state in the 8th century B.C., when Greeks first settled on the Mediterranean island, now a province of Italy.
Click here for the LiveScience article.
Posted by Gregory LeFever at 9:28 AM