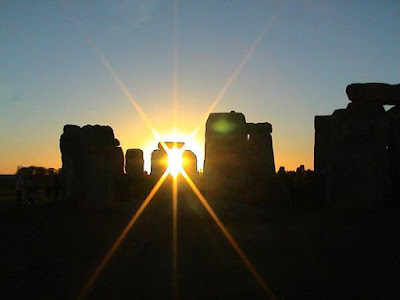 The Winter Solstice occurs when the earth's axial tilt is farthest from the sun at its maximum of 23° 26'. For most people in the high latitudes this is commonly known as the shortest day and the sun's daily maximum position in the sky is the lowest. The seasonal significance of the Winter Solstice is in the reversal of the gradual lengthening of nights and shortening of days.

. . . The solstice itself may have been a special moment of the annual cycle of the year even during neolithic times. Astronomical events, which during ancient times controlled the mating of animals, sowing of crops and metering of winter reserves between harvests, show how various cultural mythologies and traditions have arisen.

. . . The winter solstice may have been immensely important because communities were not certain of living through the winter, and had to be prepared during the previous nine months. Starvation was common in winter between January and April, also known as the famine months. In temperate climates, the midwinter festival was the last feast celebration, before deep winter began. Most cattle were slaughtered so they would not have to be fed during the winter, so it was almost the only time of year when a supply of fresh meat was available. The majority of wine and beer made during the year was finally fermented and ready for drinking at this time.

. . . Since 45 BCE, when the 25th of December was established in the Julian calendar as the winter solstice of Europe, the difference between the calendar year (365.2500 days) and the tropical year (365.2422 days) moved the day associated with the actual astronomical solstice forward approximately three days every four centuries until 1582 when Pope Gregory XIII changed the calendar, bringing the northern winter solstice to around December 21. Yearly, in the Gregorian calendar, the solstice still fluctuates slightly but in the long term, only about one day every 3000 years.

. . . Since the event is seen as the reversal of the Sun's ebbing presence in the sky, concepts of the birth or rebirth of sun gods have been common and, in cultures using winter solstitially based cyclic calendars, the year as reborn has been celebrated with regard to life-death-rebirth deities or new beginnings such as Hogmanay's redding, a New Year cleaning tradition. In Greek mythology, the gods and goddesses met on the winter and summer solstice, and Hades was permitted on Mount Olympus. Also reversal is another usual theme as in Saturnalia's slave and master reversals.

Click here for the Wikipedia entry.
Posted by Gregory LeFever at 12:14 PM