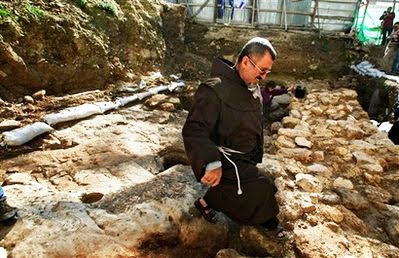 A priest examines the excavation of the 2,000-year-old dwelling.
Archaeologists yesterday unveiled the first dwelling in Nazareth dating to the era of Jesus. At the time Jesus is believed to have lived, Nazareth was a hamlet of around 50 impoverished Jewish families. Today the ornate Basilica of the Annunciation marks the site, and Nazareth is the largest Arab city in northern Israel, with about 65,000 residents.
Two thousand years ago there were no Christians or Muslims ~ the Jewish Temple stood in Jerusalem ~ and tiny Nazareth stood near a battleground between Roman rulers and Jewish guerrillas. The Jews of Nazareth duggrottos to hide from Roman invaders, said archaeologist Yardena Alexandre, excavations director at the Israel Antiquities Authority.

According to the Associated Press:

Based on clay and chalk shards found at the site, the dwelling appeared to house a "simple Jewish family," Alexandre added, as workers carefully chipped away at mud with small pickaxes to reveal stone walls.

"This may well have been a place that Jesus and his contemporaries were familiar with," Alexandre said. A young Jesus may have played around the house with his cousins and friends. "It's a logical suggestion."

Archaeologist Stephen Pfann, president of the University of The Holy Land, noted: "It's the only witness that we have from that area that shows us what the walls and floors were like inside Nazareth in the first century."

Alexandre said workers uncovered the first signs of the dwelling last summer, but it became clear only this month that it was a structure from the days of Jesus.

Alexandre's team found remains of a wall, a hideout, a courtyard and a water system that appeared to collect water from the roof and supply it to the home. The discovery was made when builders dug up the courtyard of a former convent to make room for a new Christian center, just yards from the Basilica.

It is not clear how big the dwelling is. Alexandre's team has uncovered about 900 square feet of the house, but it may have been for an extended family and could be much larger, she said.
Click here for the Associated Press article.
Posted by Gregory LeFever at 3:15 AM

Amazing information! I think what really shocked me was my own vague perception of old Nazareth! I had no idea that "tiny Nazareth stood near a battleground between Roman rulers and Jewish guerrillas!"

I teach an elective to high school students called History Mysteries. Always seeking the unusual, the gaps in our knowledge! (Of course, I have my own private passion for all ancient tides!)

This blog is now linked to mine so that I can keep up with your postings!

Thank you so much!

But of course, there was no historical "Jesus", so "logically" this fictional character couldn't have "played" there.