Oldest Submerged City Found to be Even Older 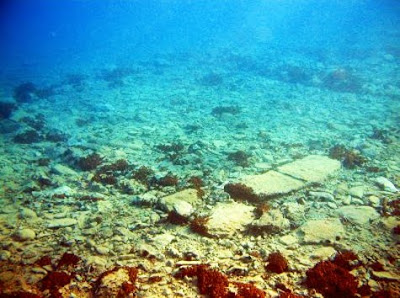 Ruins of Pavlopetri on the seabed.
The world’s oldest submerged town ~ Pavlopetri, off the southern Laconia coast of Greece ~ contains ceramics dating back to the Final Neolithic period. Archaeologists now believe the town was occupied 5,000 years ago, some 1,200 years earlier than originally thought.

As a Mycenaean town, the Pavlopetri site offers potential new insights into the workings of Mycenaean society. Pavlopetri has added importance as it was a maritime settlement from which its inhabitants coordinated local and long distance trade.

Dr Jon Henderson, an underwater archaeologist from the University of Nottingham, tells ScienceDaily: “This site is unique in that we have almost the complete town plan, the main streets and domestic buildings, courtyards, rock-cut tombs and what appear to be religious buildings, clearly visible on the seabed. Equally as a harbor settlement, the study of the archaeological material we have recovered will be extremely important in terms of revealing how maritime trade was conducted and managed in the Bronze Age.”

This summer an organized team of archaeologists conducted a detailed digital underwater survey and study of the structural remains, which until this year were thought to belong to the Mycenaean period ~ around 1600 to 1000 BC. Their investigations revealed another 150 square meters of new buildings as well as ceramics that suggest the site was occupied throughout the Bronze Age ~ from at least 2800 BC to 1100 BC.

Click here for the ScienceDaily article.
Click here for an 8-minute video on the Pavlopetri exploration.
Posted by Gregory LeFever at 6:35 PM