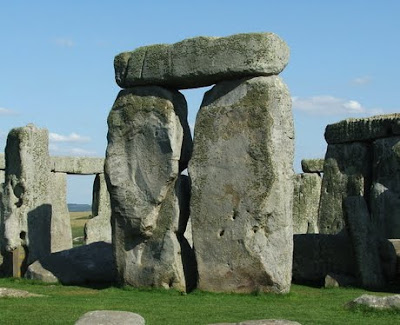 Some spotted dolerite monoliths possibly erected first at Bluehenge.
In what is being termed one of the most important prehistoric finds in decades, archaeologists this summer secretly unearthed another prehistoric circle, this one just a mile from Stonehenge.

Researchers are calling it "Bluehenge" after the color of the 27 giant Welsh stones it once incorporated, but which are now missing. According to the London Daily Mail:

Bluehenge was put up 5,000 years ago ~ around the same time as work began on Stonehenge ~ and appears to have been a miniature version of it. The two circles stood together for hundreds of years before Bluehenge was dismantled. Researchers believe its stones were used to enlarge Stonehenge during one of a number of redevelopments.

Professor Tim Darvill, Stonehenge expert at Bournemouth University, said: “This adds to the richness of the story of Stonehenge. We thought we knew it all, but over the last few years we have discovered that something as familiar as Stonehenge is still a challenge to explore and understand. It wouldn't surprise me if there weren't more circles.”

All that remains of the 60-foot-wide Bluehenge are the holes of 27 giant stones set on a ramped mount. Chips of blue stone found in the holes appear to be identical to the blue stones used in Stonehenge.

The four-ton monsters, made of Preseli Spotted Dolerite ~ a chemically altered igneous rock harder than granite ~ were mined in the Preseli Mountains in Pembrokeshire and then rolled, dragged and floated the 200 miles to the site on the banks of the Avon in Wiltshire.

Stonehenge is believed to have been built and rebuilt over 600 years in three main phases, the earliest around 300 BC.

I think that like the pyramids of Egypt and Tiahuanaco in Bolivia, the dates they said for their construction are wrong, the places look much older, and the astronomical evidence shows that they were built long before 10000BC.