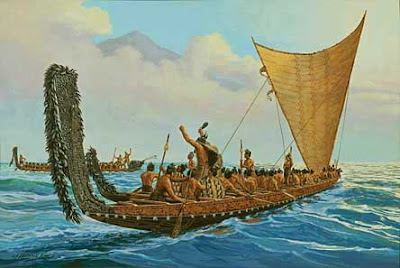 Rendition of ancient New Zealand war canoe.
Researchers are saying Polynesian canoe design suggests New Zealand was at least partially settled from Hawaii.
New data suggests a course of Polynesian settlement that started in the far western islands and jumped to the far eastern islands before then working backwards towards the original point of origin. According to the New Zealand Herald:

Archaeologists have said the Lapita peoples ~ probably from China and Southeast Asia ~ who colonized Pacific islands between about 1400 BC and 900 BC became the Polynesians who settled several island groups outwards out of Tonga and Samoa beginning about 500 BC, arriving in the Marquesas about 300 AD, the Hawaiian islands by 800 AD to 900 AD, and finally in New Zealand about 1200.

"This is not a paper about canoes," Ehrlich said. "It's a paper about whether or not there are discernable, explicable patterns in history."